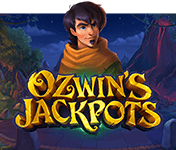 I'm on the wild side

InterCasino is known for its number of multi-million jackpot winners throughout its prestigious 20-plus-year history. If you’ve ever felt mystified by jackpot games, then keeping reading, because playing progressive jackpot games online is incredibly simple.

Progressive jackpot slots work in exactly the same way that regular slot games do. The only difference is that a jackpot will continually build up in the background until it’s ready to burst, sometimes releasing millions all at once. Truly astounding amounts can and are won on a regular basis, sometimes from a single spin. It’s all about getting to the bonus rounds.

InterCasino also offers several local jackpot games. This means that only InterCasino players can win the jackpot, increasing your chances of landing the big one. Good luck!

Can you win our online casino jackpots from anywhere?

There are a few countries where players cannot play on InterCasino websites, but with those exceptions, our multi-million euro progressive jackpots can be won from wherever you happen to be. We have had players from many countries win big jackpots over the years and we truly hope that you will be our next lucky player.

How do progressive jackpots work?

Some online slot games take a very small proportion of each spin being played by every player – from whichever country they may be in – and adds that tiny sliver of funds into a larger pot. If the slot is popular, these tiny amounts of funds grow into a very large overall prize pool. The prize pool simply sits and grows until someone wins at the highest level in the bonus rounds. It needs to be pointed out that winning at the highest level will normally include staking at a high, or the highest level. These games can provide big prizes for small bets, but the biggest prizes are won by people making biggest bets.

This form of jackpot building is very different from the kind of casino games that most people will be used to. For example, in blackjack, poker or roulette, the total amount of winnable money relates almost exclusively to the chips which can be seen on the table in front of a player. This relates to all table or live games – there are no millions waiting to be won behind the scenes.

Which games have the biggest jackpot prizes?

In the online slot games world, there are lots of games that have big jackpots where a player can win a large real money prize. However, as in every area of the world, there are a few games that stand out as bigger than the rest. When it comes to slot jackpots, the two main games are Mega Fortune and Mega Moolah.

In fact, the largest online jackpot ever paid was by Mega Moolah, for £13,209,300, in October 2015 to a British man from Cardiff in Wales. That size of payout is obviously unusual, in fact it was a world record, but payouts of more than £1m happen several times each year on Mega Moolah.

What are the odds of winning a slot jackpot?

Regulated slots, like those on InterCasino, have pre-set return to player percentages. These numbers are an expected average over large numbers of spins. This means that in the short-term any result is possible, but over the long-term (hundreds of thousands of spins) the amount paid out should be identical to the known average.